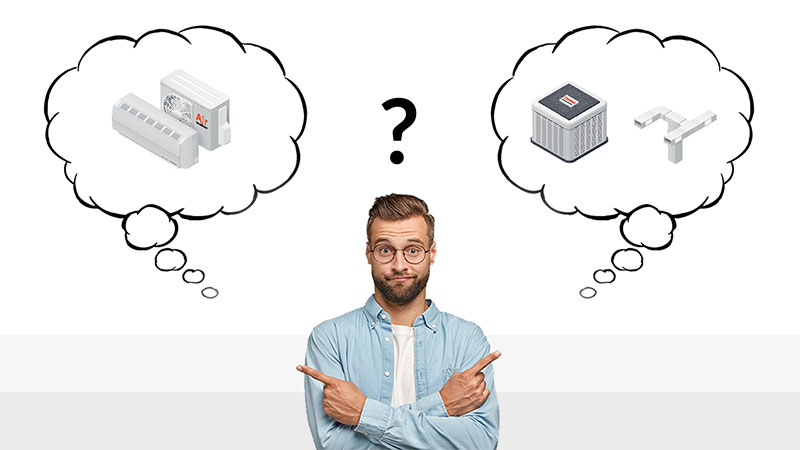 Air conditioning is often one of the prime considerations when dealing with commercial or residential buildings. Whether you are renovating your house, or drawing up plans for your new dream home, you will inevitably be faced with the choice between a ductless system and a ducted one. This can quickly become a daunting task. 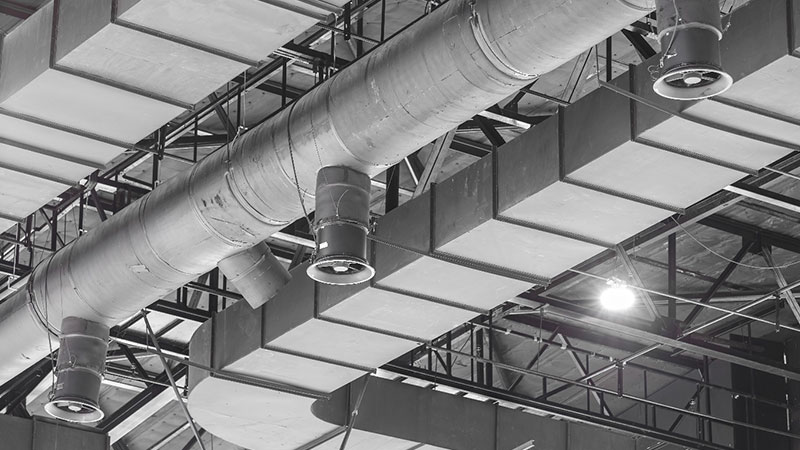 As the name suggests, ducted air conditioning provides heating or cooling through a system of ducts spread out all over your home or commercial space. A central unit, consisting of a condenser, compressor, and an air handling unit, is usually located in the basement, attic, or garage. It provides cool or hot air, which is then distributed throughout the building through a series of ducts and vents, providing the appropriate climate control. 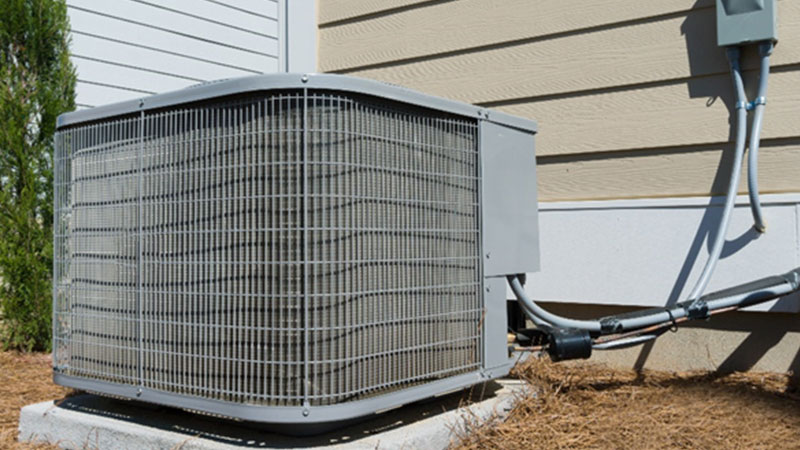 These systems are by far the most common type of central air conditioning system currently being used. They consist of the condenser and compressor placed outside in one package. A separate evaporator is placed indoors within a segregated container, usually located in a closet or the attic. The outdoor unit provides the refrigerant to the evaporator, which then cools the air and pumps it down the network of ducts through an air handling unit.

As is evident from the name that these systems split the unit into two parts, with the condenser and compressor placed separately from the evaporator. If a property already has ductwork installed for a furnace, then split type central air conditioners are the most convenient choice. 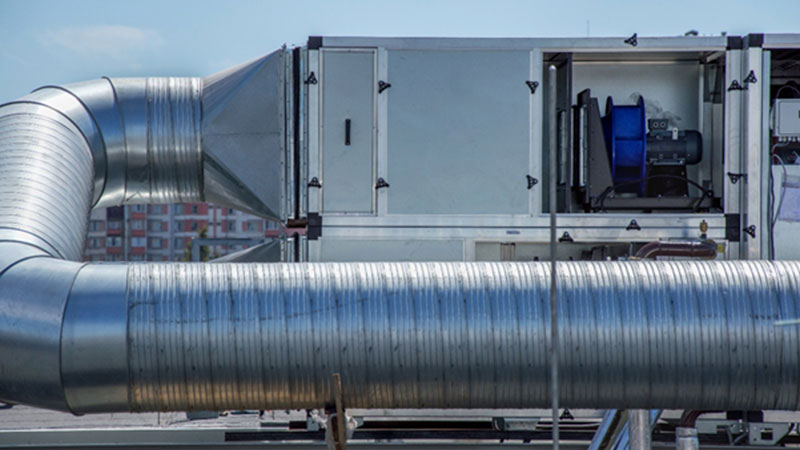 In such a system, all the components, including the condenser, compressor, and evaporator are situated in one singular unit. It can be placed either outside beside the wall of the building, or on the roof. This type of system is best suited for commercial buildings, or already built homes, where space can often be limited indoors. Large ducts then circulate the air form the air handling unit into the room, and also to circulate it back to the unit. These systems can be coupled with heating coils or furnaces to also provide heating facilities.

Packaged central air conditioning systems provide generally lower efficiencies than split systems but have the added advantage of not taking up any space inside the home.

Before going for packaged central systems, be careful to check out your outside space well in advance. These systems can be heavy, so the roof should be able to adequately handle the load. Or if you’re placing it on the ground, concrete emplacements need to be dug in before commencing further.

Another important consideration while choosing ducted air conditioners is the ductwork. After all, it is what the system is named after!

Types of Ducts for Ducted Heating or Cooling

Ducting makes up a major component of central air conditioning systems. These are channels for the air to travel throughout the home. There are two duct systems currently being used: 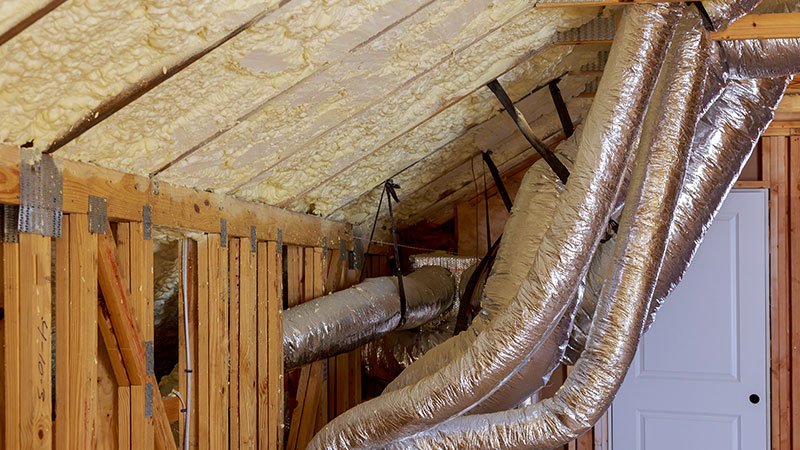 These AC ducts are large diameter, tube like structures, made up of a mixture of metal framework surrounded by flexible plastic and insulation. This type of ducting is often cheaper and easier to install. It is best suited to confined spaces, where rigid structures can often be hard to install, or at the ends of a rigid ducting network, to connect it to the air outlet. An important consideration while installation of flexible ducting is to ensure that there are no kinks or bends, which might hamper airflow. 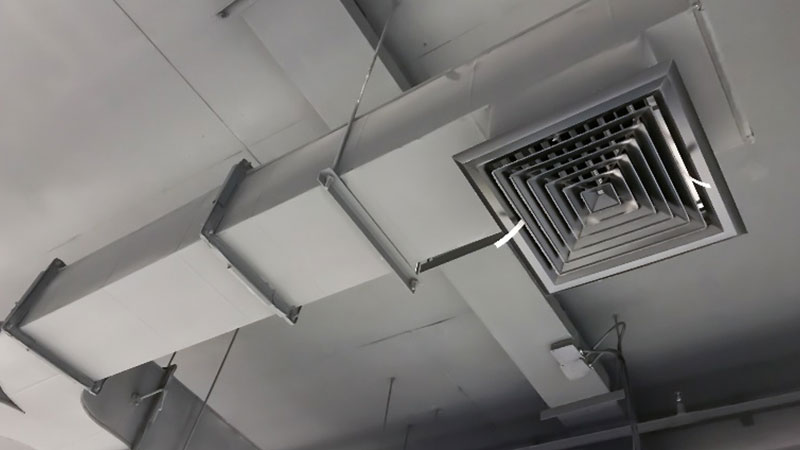 As the name suggests, these AC ducts are fixed structures used to distribute air across an internal space. They are sturdier and more durable than flexible ducts, but at the same time, harder to install. They are usually made of metal. The use of fiberglass instead of metal serves to reduce noise levels coming from the air conditioning units. But it has the disadvantage of being a potential health hazard, where deteriorating and old fiberglass lining can release fiberglass particles into the air.

Now that we’ve had a general overview of central or ducted air conditioning systems, let us go over the pros and cons of them: 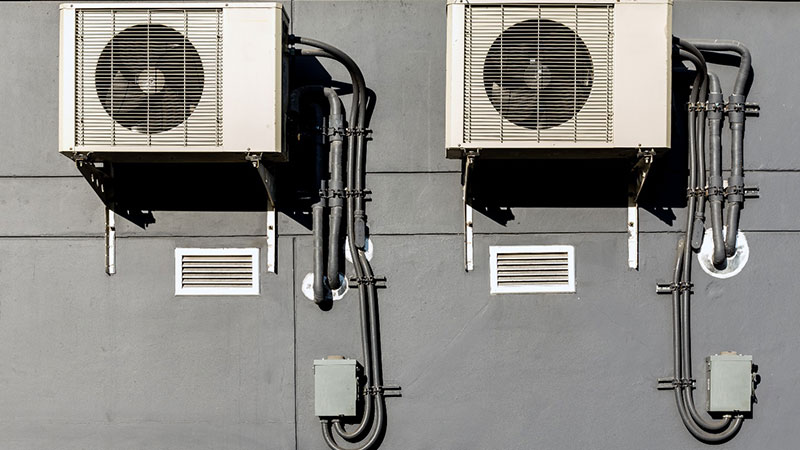 As is obvious, these systems do not employ any type of ductwork to move air from one space to another. Instead, these are standalone systems, where the conditioned air is introduced into the room through an air handling unit installed within the room. This indoor unit is supplied with the necessary refrigerant through an outdoor unit, or is installed within the same package as the indoor unit.

Ductless air conditioners are gaining popularity due to their multiple advanages. There are various types of ductless air conditioning systems and heat pumps in the market. These can be conventional but modern smart varieties are also entering the market. You can make any standard ductless AC smart using a smart AC controller.
Let’s go over some of the major types: 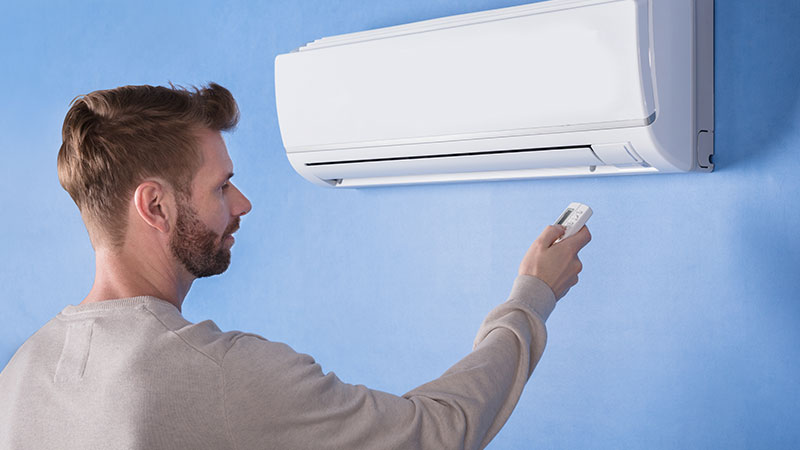 Ductless mini split air conditioners consist of the indoor unit being mounted high up on the wall, while the outdoor unit is placed outside, either on the ground or on a stand attached to the wall. Both the units are connected with each other through a small pipe bundle, consisting of piping for the refrigerant, condensed water, and also a power cable. This bundle is passed through a small unobtrusive hole in the wall. These air conditioners provide the flexibility of zone control, allowing the user to set the climate of each room individually. Latest technology allows the same mini split units to work as reversible heat pumps as well, supplying heat in the winter months.

These systems are very similar to wall mounted ductless mini split air conditioners, with the notable difference being that instead of one outdoor unit powering one indoor unit, the outdoor unit can be used to power up multiple indoor units. The basic principle is the same, but a larger outdoor unit is required to supply the necessary power to the multiple systems. 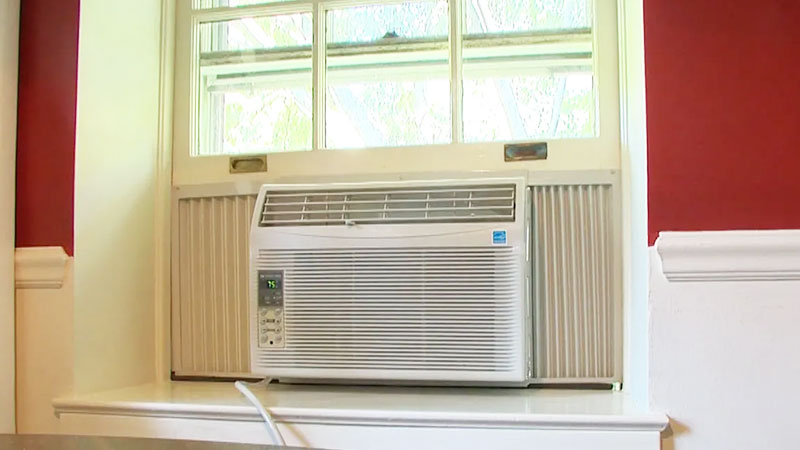 Instead of having a separate indoor and outdoor unit, both the evaporator and condenser are packaged into one housing, and installed on a window. The interior air is cooled by the evaporator, while the absorbed heat is blown outside. Within a large home, multiple units may be installed, with one in each room to provide adequate cooling. 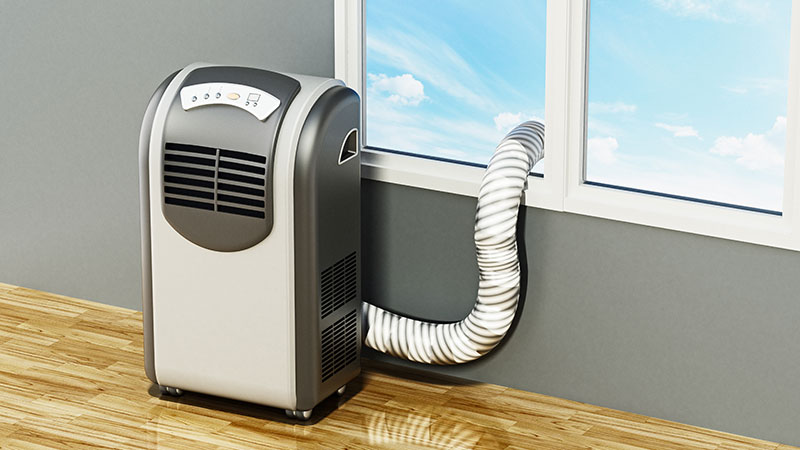 With all the components being housed in one package, portable air conditioners are very similar to window air conditioners, but the notable difference is that the portable ductless air conditioner can be put up anywhere, as required. The unit is usually on wheels, or sufficiently lightweight so it can be transported around easily. These units have a hose which can be extended and placed outside, to provide for an outlet for the heated air venting from the condenser. 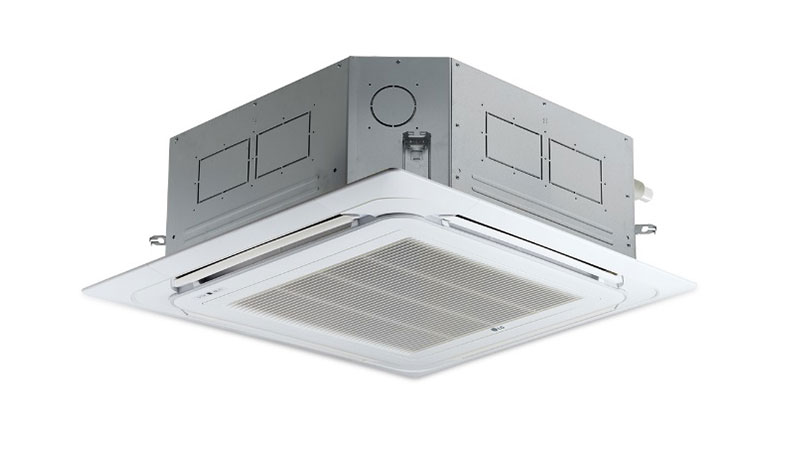 Cassette air conditioners are usually found recessed within ceilings of the room. Much like a wall mounted split unit, they have an outdoor unit which is used to transport the refrigerant to the indoor air handling blower. They are usually found in larger sized rooms, such as shopping stores or workspaces.

Now that we’ve had a general overview of ductless air conditioning systems, let us go over the pros and cons of them:

Which One to go for?

There is no hard and fast rule about when to go for ducted air conditioner or ductless. HVAC systems are a complex piece of engineering, with many considerations which need to be taken into account. The final choice boils down to the specific needs of the user. Whether they are installing the system in an already built property, or one they are building from scratch? What is the area of the space they are heating/cooling? What is their budget? Whether they want individual zonal control or not? All these questions, and many more, need to be answered before going out and buying a suitable air conditioning system. Happy hunting.